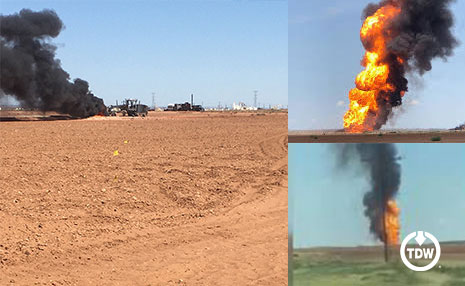 Tulsa, Oklahoma (October 8, 2020) -- T.D. Williamson (TDW) crews isolated a ruptured 14-inch natural gas liquids (NGL) pipeline while product continued to flare off, enabling repair while the system remained in service and creating the conditions for the fire to extinguish itself.

The west Texas pipeline exploded after it was hit by a third-party contractor excavating the right-of-way nearby. The explosion and massive fire that followed, which shot flames 300 feet into the air, injured four people, one critically, and destroyed the trencher and all other equipment within a 300-yard radius. It was said at the time of explosion the concussion was felt (10) miles away. The responding fire department registered a temperature in excess of 1500*F.

The operator moved quickly to reroute product at a drastically lower flow rate. Within hours of the line strike, TDW had begun mobilizing equipment and personnel to the site, including eight hot tapping and plugging (HT&P) technicians who arrived from multiple TDW service centers in Texas, Oklahoma and California to provide around-the-clock coverage.

The team performed a double STOPPLE® operation to isolate the affected section. Sweeping the hot tap holes — a process that removes any metal chips or debris that could prevent the STOPPLE head from sealing securely — created a partial seal that caused the fire to bellow; when the STOPPLE heads were fully set, they robbed the fire of the NGL fumes fueling it, and the blaze extinguished itself.

STOPPLE plugging machines have safely and reliably isolated pressurized sections of pipeline without shutdown or interruption of service for more than 60 years. They are part of a total TDW advanced isolation and intervention solution that includes hot tapping machines, fittings, valves and plugging heads

“Everyone came together so efficiently that in less than six hours after the operator’s initial call the fittings were out the door,” Parrish said. “And it took less than one day on the job site to solve our customer’s problem, safely and successfully.”